I have been a stamp collector all of my life and have worked in Theatre almost as long.
It seemed natural to me that I became a Theatre Topical Collector.
I have First Day Covers and Programs of Theatre Stamps, assorted Advertising Covers and Postcards of Actors, Theatres and Plays onstage plus many related non-philatelic items.
I found my first Theatre Cover over twenty years ago and although I have found many more nice pieces since then, it is still my favorite.
A photo of the cover, “Uncle Rube” staring Arthur Sidman, is in the previous blog post.

At a recent stamp show in Rochester I bought two more Theatre covers to add to my collection.
When I am unfamiliar with the names on the covers I like to “Google” them to find out what information I can about them.
One of the new covers, a simple stamped envelope (Scott No U398) with a rubber stamped advertisement in the upper left corner yielded a very interesting story.
The Cover is dated December 16, 1907 and was sent from New York City to Boston with no other markings.
The corner ad says: Clara Bloodgood, in Clyde Fitch’s New Comedy “The Truth”. 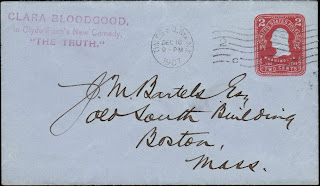 From my research I found out that Clara Bloodgood was a well known and respected Broadway actress of her day and appeared in several of Clyde Fitch’s plays, some of which he wrote specifically with her in mind.
Mrs. Bloodgood appeared in at least eight Broadway plays as well as many touring productions.

Mr.Fitch was one of the first American playwrights to get his works published overseas and his stories were very popular and later on some were used for the basis of several early movies including 1924's "Beau Brummel" starring John Barrymore.
His works had strong female characters and he was sometimes called the American Ibsen.
Because of the large size of the casts, many settings and changing audience tastes his plays are not often seen today. 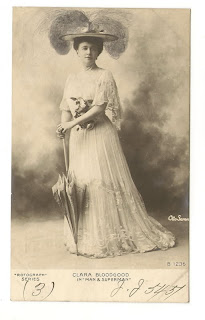 Clara Bloodgood
In 1905 Mr. Fitch dedicated the publication of his script of "The Girls with Green Eyes" to Mrs. Bloodgood, but seems that he liked the actress who starred in the London production of “The Truth” better and dedicated the published script to her.
This greatly upset Mrs. Bloodgood who was performing the play in Baltimore at the time and one evening, after getting her costumes ready, she shot and killed herself. 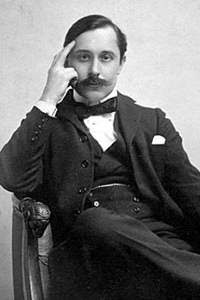 Clyde Fitch
Mr. Fitch would die two years later in Europe after delaying medical treatment for appendicitis.
Because the cover was sent a week after her death I wanted to see if I could find out who really sent the cover, who it was sent to and why.
The cover was sent to J.M. Bartels who to my great surprise turned out to be a well known stamp dealer and expert who is in the American Philatelic Society Hall of Fame.
At first I was not sure if he was the right man because the first address I found did not match the one on the cover, but after further research I found a photo of a cover sent from Bartels Office at the Old South Building address.

I will never really know who sent it and why because there were no contents with the cover, but I learned a great deal about the people on the cover and a bit about American Theatre History at the turn of the last century.

The tie-in between my two interests of Theatre and Philately will remain a mystery but the search for answers was enjoyable and I will continue to look for more information on the connection between the three people on the cover.

More about Clyde Fitch can be found at the following link:
http://en.wikipedia.org/wiki/Clyde_Fitch


A review of a 2006 production of "The Truth" can be found here:
http://www.metropolitanplayhouse.org/TruthReview.htm

A copy of the the play 'The Truth" can be found on Google Books.