Like many other stamp clubs our club used to view APS slide shows at our meetings.

Several years ago after it seemed that most of the club's members had seen all the slide shows many times over  it was decided that we would try to make our own presentations for club meetings.
At first members just brought in interesting items from their collections for expanded show and tell sessions but then a few club members began to produce PowerPoint presentations.
Those club members with computer skills have also helped other club members to scan stamps and covers and make additional shows.The use of close up computer scans helps club member see details that might be lost just looking at a stamp or cover in an album quickly being passed around the room.
Some recent topics have include French Stamps, the History of Thurn und Taxis, Theatre Covers, Ham Radio on Stamps, Stamp Boxes and an overview Art Cover Exchange club and a look at many of their handmade covers. The presentations have all been informative and enjoyed by fellow club members.
At the July meeting a presentation on the early postmarks of Brockport was given. The earliest known postmark is from 1834 and several 19th century covers are seen below. 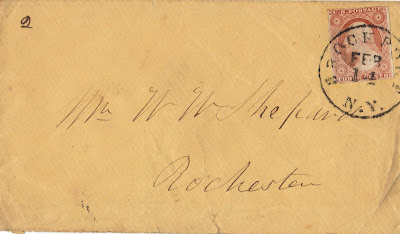 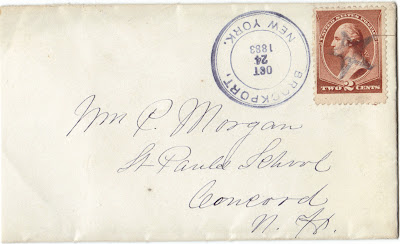